“Creativity (and Innovation) Profiling”
My work teaching and supervising research projects on creativity in Oxford led in 2009 to the establishment of “TheCreativeDifference.net” website aimed at understanding and profiling the individual differences associated with creativity in different tasks and domains and continues today there and through the Creativity Profiling Project (CreativityProfiling.org)

“Individual Differences in Cognitive Biases: Psychometric Test Development”
Developing a series of psychometric instruments for a range of cognitive biases crucially important for decision making, but for which not many valid and useful measures of individual and cultural differences currently exist.

“Rationality, Inter-group Conflict, and Religious Belief”
A cross-disciplinary exploration of the problems and possibilities for religious belief in an age of science and globalization.

“Leading Beyond the Tribe: A Psychometric Study of Leadership and the Paradigm Shift towards Global Perspectives.”
An ongoing study of hundreds of young, leaders selected to participant in the Preparing Global Leaders Foundations programs around the world since 2013.

“The Visionary Personality: A Theory of Culture-shaping Individual Differences.”
Ongoing research based upon tools developed and studies carried out on over a thousand participants in research for my doctor dissertation at Oxford. 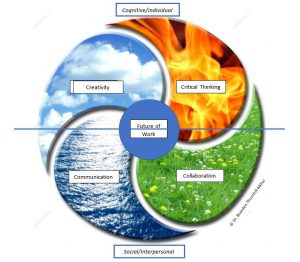 Diagram illustrating the interpenetration of the 4Cs (creativity, critical thinking, collaboration, and communication) in dimensional space according to their potential cognitive/individual vs social/interpersonal emphases

The 4Cs are not separated entities but interlinked elements that can help individuals in their learning process and synergistical bootstrap the development of their cognitive potentials (Brandt et al., 2021). Their teaching and development require a complex intervention and mobilization of psychosocial resources—a major shift in pedagogical techniques and even changes institutional structures (Ananiadou & Claro, 2009). These efforts are both aided and complicated by the massive changes and rates of change caused by evolving digital technologies (Van Laar, 2017).

Further Proposal: A “7Cs Model for the Future of Education & Work”

Traditional educational approaches cannot meet the educational needs of our emergent societies if they do not internalize, promote, and assess in line with the new learner characteristics of the 21st century (Sahin, 2009).

Considering larger practical and global contexts I also argue for the inclusion and integration of three additional Cs: “Computer literacy,” “Cross-cultural awareness” and “Citizenship/Character”) into future models for the future on education and work.